Where were we… congealed fuel filter.

I was instantly convinced that if the filter looked that bad the fuel lines and gas tank couldn’t look much better. And wouldn’t you know it, I was thrilled to have something to do.

As I researched replacing the gas lines I became relieved I was doing so. Every forum I visited had foreboding warnings of DON’T LET THIS HAPPEN TO YOU with a photo of a bus engulfed in flames. Apparently it was exceedingly common for the rubber sections of a vw’s fuel line (which connect metal pieces) to become brittle over the years of sitting, leak, and cause an engine fire. Yikes.

I also read that the gas tanks were poorly sealed and rust-prone to begin with, and that gasoline separates over time and the heavier water settles to the bottom and… you get the picture. But it seemed a local radiator shop would be able to “boil it out” (fill it with an unsettling cocktail of corrosive chemicals to clean out the insides). I just needed to remove the tank.

The only mention of this process in the holy script which is How to Keep Your Volkswagen Alive is: “Remove it — it’s easy — and have it steam cleaned at a garage.” John Muir is a liar. Or, at the very least, he’s never witnessed a wrestling match like that between me and Norman’s gas tank.

A week after seeing the sorry state of the fuel filter Chris (my go-to guy for “wtf do I do now/htf do I do this”) met me in the garage. He dismantled everything that could be from the top of the engine while I prepared the fire wall for removal. Some screws, a couple bolts, a couple metal tabs bent open, and it popped out pretty easily. 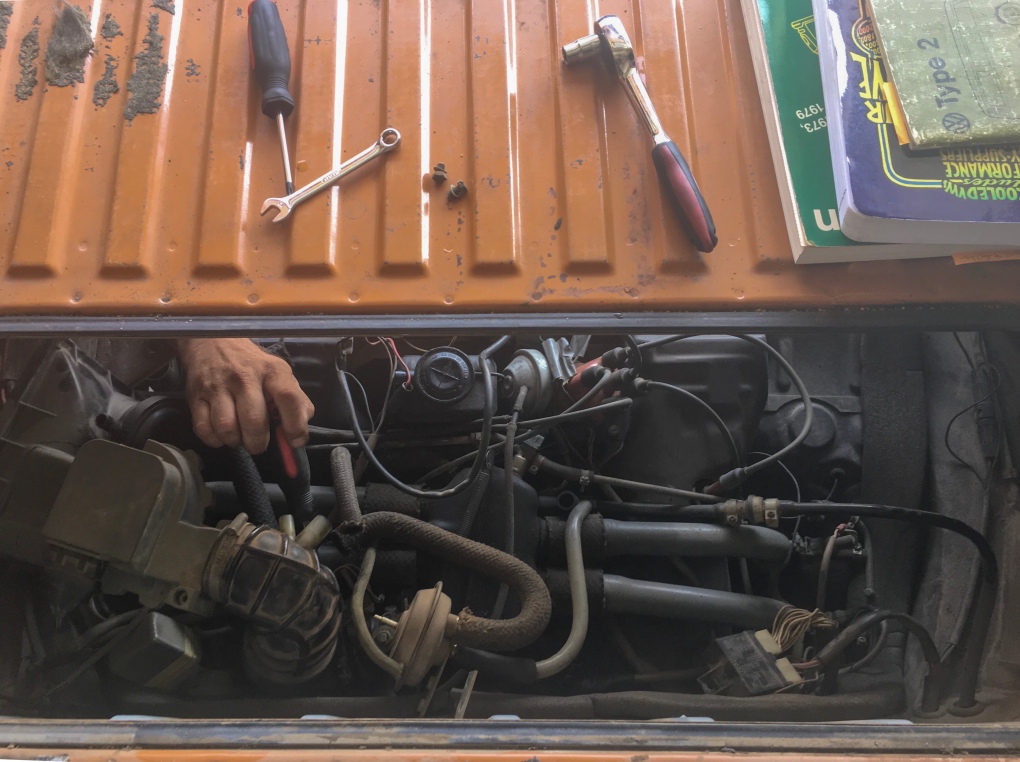 The gas tank was strapped in place with metal suspenders that attached to the undercarriage of the van with bolts that were positioned in such a way as if to say: “Are you sure you’re supposed to be here?” They were tucked up and behind and in between immovable metal and were impossible to get to with a straightforward tool.

The gas tank with its suspenders, the firewall removed to expose decades of dirt roads 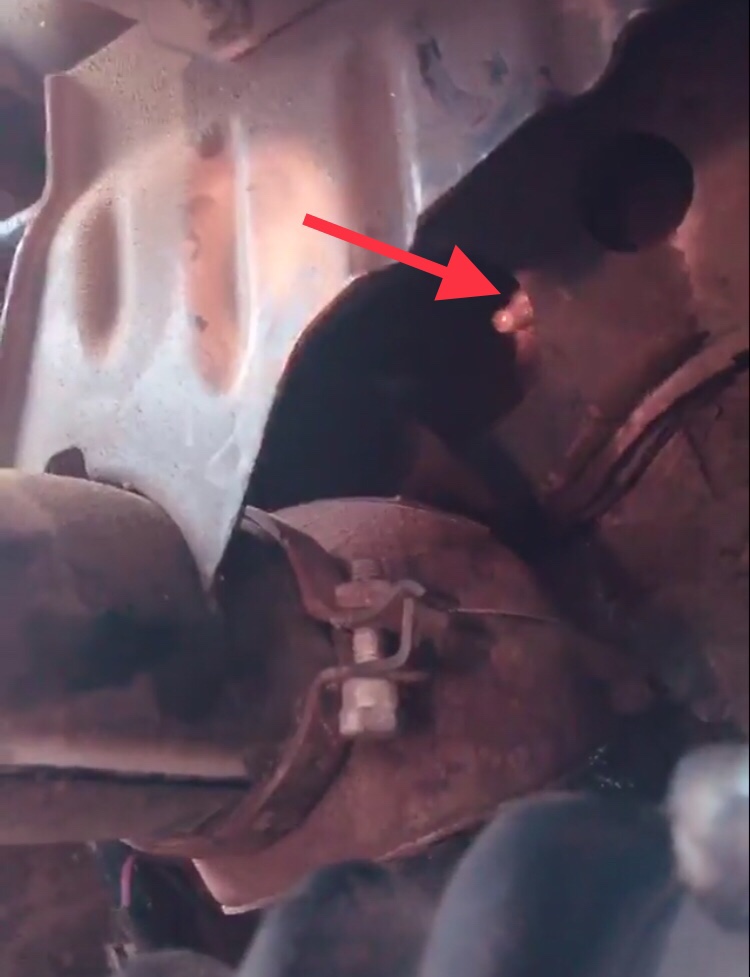 One of the two bolts securing the tank straps

I stopped at Home Depot to pick up the necessary elbow joint and Chris went back to work. I also picked up some chemical splash goggles; flakes of who knows what had been getting in my eyes while poking around underneath the van. I decided to detach the two lines to the tank before attempting the bolts. Just cut them, Chris said, since you’re going to replace them anyway.

In the carefree days before I was baptized in gasoline

It took a good amount of muscle to get through the line with a pair of dull wire cutters. The first line produced a scant dribble of gas. Cool. I was even more confident the tank was empty. The return line gave up much more of a fight, but a last strong squeeze severed the line.

And gas rained upon me.

Not a little dribble. A downpour. Those new goggles came in handy since some splashed in my face and would have gone in my eyes. I rolled out as quickly as I could and centered the oil drain pan I’d had ready just in case under the deluge as best I could, but the stream was running off the starter and other components and falling in a haphazard mess, splashing everywhere and soaking the cardboard under the van. 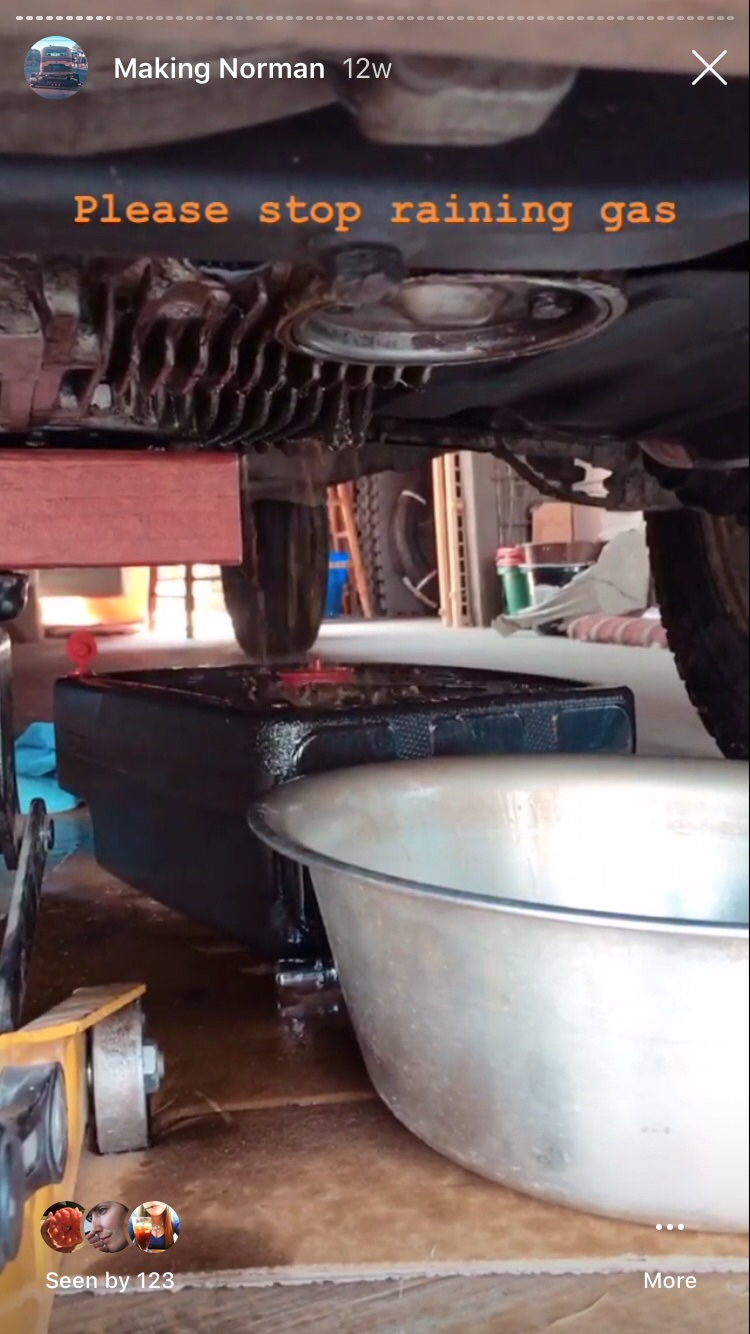 Pro tip: When faced with a flammable hazard be sure to take the time to post about it

I crouched at the back of the van willing the rain to stop. Minutes went by and it showed no sign of slowing. How much gas could the tank hold? At least ten gallons. Panic began creeping in. I grabbed a large dog dish and set that on top of the drain pan, which worked much better since it was closer to the source and had sides to contain the splashing. A few minutes later the dish was halfway full. I was going to have to transfer the gas into the two small storage containers I had. I scrambled for the containers and my oil funnel. The funnel wouldn’t stay secure without holding it and I needed both hands for the dish, so I propped everything against a bush.

The dish was 3/4 full at this point. I somehow managed to slide it out from under the van without spilling any but made up for it tenfold when I poured it into the funnel. It went everywhere: on me, on the bush, on the dirt, on the driveway. I filled one two-gallon container and part of the other and replaced the empty dish, gas still gushing.

Wouldn’t you know, this was the moment my mom came out to talk to me. She handled it extremely well. She had been planning to take a shower, but thought maybe she’d hold off using hot water so the pilot light on the water heater, which was about four feet from the gasoline puddle, wouldn’t come on. “Isn’t it always on?” I asked. We were quiet for a moment. I tried making a joke about how blowing up the van would take care of the tank removal issue, but it wasn’t funny.

Finally the gas slowed and then stopped. I filled the other container and the drain pan, spilling more in the process.

I still wanted to try to get at those bolts, so I climbed under the van. I spent a terrible amount of time, probably 15 minutes, trying every combination of socket handles and extensions and elbows with no joy before realizing I was using a 12mm socket instead of 13. Now I had ahold of it, but I couldn’t get the bolt to budge. Thinking maybe I’d have better luck with the other, I slid to the right side.

As I fit the socket over the bolt my back started to burn. I had thought to remove the gasoline-soaked cardboard before going under but immediately forgot in my fumigated and agitated state. For the second time that afternoon I scrambled out from under the van as quickly as possible. I had had enough fun for one day. I was sick from the fumes, hot and itchy from laying in gas, and really rattled after a potential calamity. I was embarrassed about misjudging the fuel situation and making such a mess. The garage and yard smelled awful, especially right next to the front door where I’d abused the bush. I felt dejected and incompetent — I thought this was supposed to be easy!

Two days later I returned to dispose of the gas and have another go at the bolts. I sprayed the bolts with PB Blaster, a penetrant, to help loosen them before taking the gasoline to hazardous waste disposal.

I’d mentioned to Chris that I couldn’t get good leverage on the bolt the other day; I was too close to the undercarriage to use a regular-sized socket wrench, and the mini handle didn’t give enough torque. He said he had a second extension to use — I did too! I popped it on and it gave enough space to use the full size handle. After a half-dozen or so tries it budged! 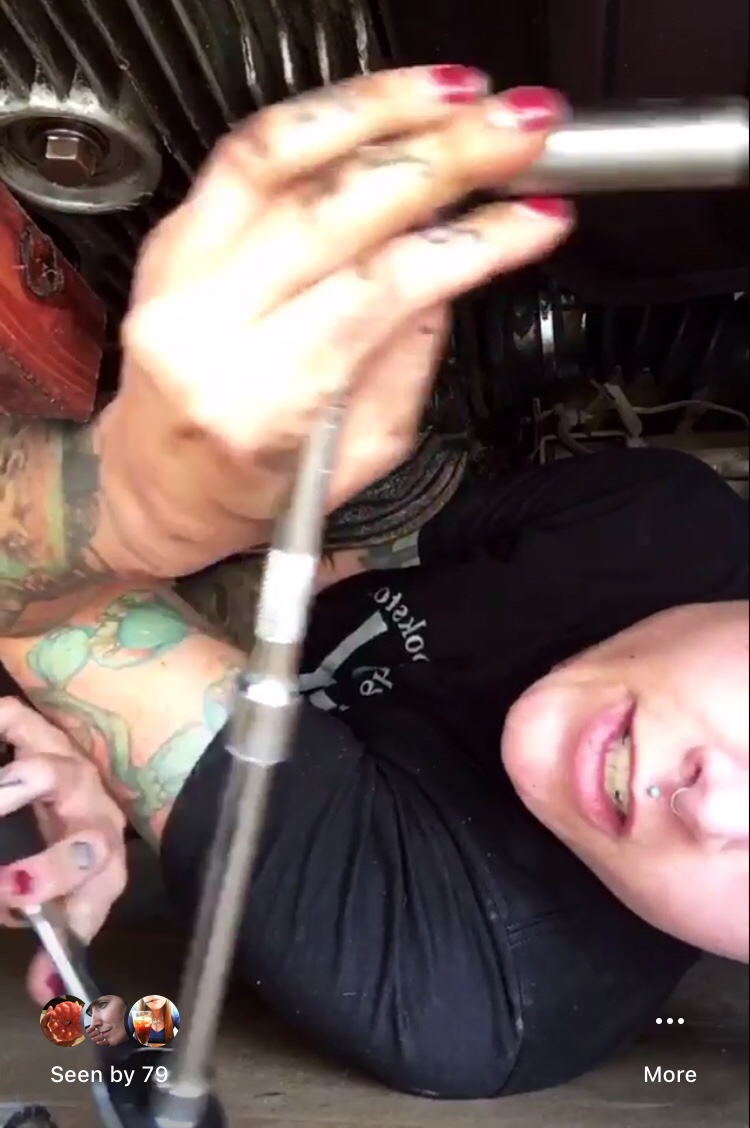 Screenshot from a video celebrating the bolt’s vanquishing, showing the tool I used

I gave it a few more turns, then hopped up to check that the metal straps weren’t stuck and twisting with the bolt, as I’d seen happen in a YouTube video. We were good so I kept at it. One came off, then the other.

I was elated. I felt better after taking care of the used gas as quickly as possible, and was empowered by the victory over the bolts. I was one step closer to removing the gas tank! How many blog posts does it take to remove a gas tank? I’m not sure, but three months later that bush is not doing well. Oops.